Along with three colleagues from the Professional Weavers' Network of NZ, Peg is participating in an Exhibition at Fibre Spectrum, Trafalgar Street, Nelson for the month of January.  Here are the works she is showing: 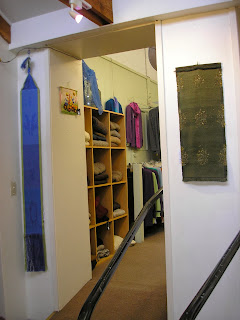 Four of the hangings are in the classic damask weave Peg is known for. Three of them are the long narrow ones (blue one on the left has been named Summer) on a swivel so both sides of the work can be seen. On the right is a green hanging with gold rayon and metallic motifs, titled Golden Moss. 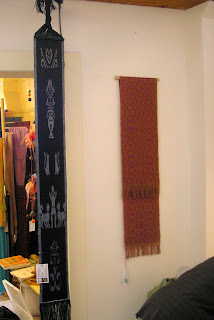 Another of the long ones, Symmetry, is seen here alongside a deflected double weave scarf by Sue Broad. 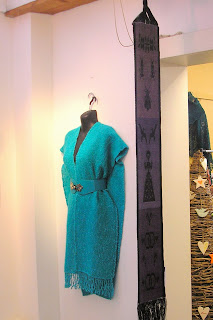 And this one, named Queen Bee, is hanging beside a turquoise wrap by Rose Pelvin. 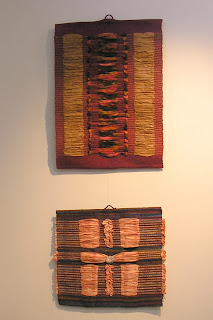 Some of Peg's more recent work incorporates Japanese paper and, in the top piece, felted yarn.

The exhibition will be on for the whole of January. More photos can be seen at marlboroughweavers.blogspot.co.nz and warpedtoweave.blogspot.co.nz
Posted by Rose at 21:05 No comments: